In RL, a lot of guys don’t like wearing suits; they find them uncomfortably formal. But consider this, in case you didn’t know it: a lot of women are attracted to guys with the savvy and self-confidence to be at home in a good suit. When you know you look good, your positive self image makes you happier, not to mention more appealing. So we are in search of the best suits in SL. This week: the elegant new Hart suit by Deadwool. 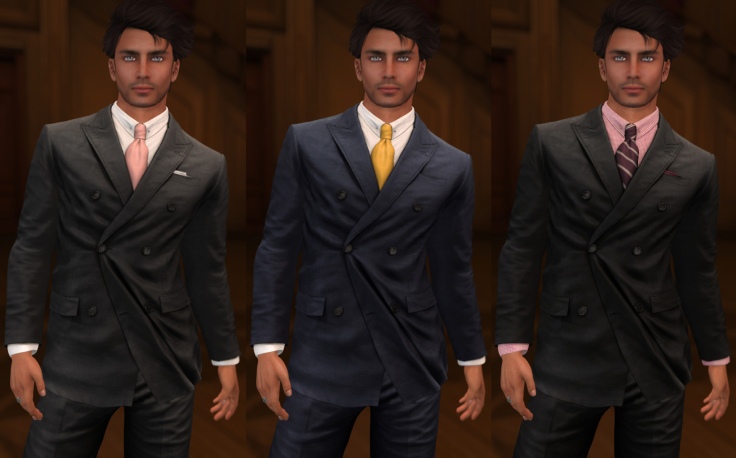 As one expects from Deadwool, the mesh model and the texturing on this suit are superb and highly realistic. It’s available in 18 colors, including classic darks as shown here, plus mid-range and light colors, in both traditional shades and moderately quirky ones like aubergine and blush. Jackets (with the shirt & tie add-on included) and trousers are sold separately so you can mix and match colors. At L$850 per color, it’s not cheap, but then again, it doesn’t look cheap. This is the most elegant men’s suit I’ve seen in SL.

There was conversation among customers about the creator’s decision to pull the jacket back at an angle instead of hanging neatly. For some, that was a deal breaker — a few felt that it made it look as if the jacket didn’t fit — but personally, I don’t think it detracts from the overall effect of the suit at all.

The Hart suit is a great choice to wear any time you want to dress up, for a club, a concert, or any special occasion.

What I’ve been talking about

Some images from this blog